A contest on G+ to come up with a new way to speed up combat in D&D caught my interest, two responses in particular.

The first was Cavegirl’s one roll fights. It reminds me of the War Machine mechanic from Rules Cyclopedia, and really drives home the idea that battle is a risky proposition that you should not undertake without heavily stacking the odds first. Personally, if I were to hack it, I might turn it into two rolls instead. Players could see the result of the first roll, and then get a chance to affect their fates with spells and such, or simply run away. Then, winning two rolls would mean an overwhelming victory, winning only one roll a victory at a cost, and losing both rolls an escape-or-die situation.

The second interesting idea in the thread was replacing HP with HD, that is, you can take a number of hits equal to your number of hit dice. One hit from any weapon is... one hit. There would be no damage rolls, which certainly should speed up the game and reduce calculations and bookkeeping... I couldn’t stop thinking about this idea. So I grabbed my trusty spreadsheets and tried to hash it out in detail.

Note that this is not playtested yet, just theorycrafting so far. I would quite like to playtest this at some point if I can iron out some of the issues, but that may require additional hacking of ability scores.

Working out the number of hits

First, let’s look at how many hits a PC can take under current rules (using the gold standard of B/X). On average, a 1st level Fighter, having d8 HP can take 1.29 hits from a d6 weapon before going down. Magic-Users can take 0.71 hits, and clerics 1 hit. These averages increase linearly by level.

Here’s how many d6 hits a B/X character can take on average under the default rules, rounded up.


So that is the rough guide we should look at when designing this new damage-roll-less system, in order to approximate the same level of PC survivability. Throughout this article, I will refer to these new survivability points as Health, to avoid confusion with the normal Hit Points. Instead of damage, attacks will deal Wounds. Taking one Wound is the same as losing one Health. A d6 of old HP damage translates to one Wound in the new system.

So why are we looking at d6 damage? d8 damage, after all, is quite common for a one-handed weapon of war - there’s not much reason for a Fighter to use a handaxe instead of a battleaxe. But remember that variable weapon damage is an optional rule in B/X. We are looking at the d6 because that’s how much damage all weapons originally did. As for monster damage, looking quickly through the list, the d6 seems to be most common die, although there are a lot of d8s (and “as weapon”) too.

We are faced with a choice of two options for this new system. Either we base player Health off the d6, which is in line with non-variable weapon damage. This makes monsters die more easily (29% more), since we’re pretending they used a d6 hit die before when in actuality it was a d8 (well, at least after variable weapon damage was introduced - before that it was a d6). The other option is to base everything off the d8, which makes everyone about equal in relation to B/X, but greatly boosts d4 weapons and smaller. Perhaps we should err in favour of the players here.

So, we have all weapons dealing 1 Wound on a hit, and monsters having Health equal to number of HD. The straightforward way to work out player health would be to use that d6 table above straight. Essentially, players would have 1 Health per d6 (3.5) hit points, rounded up. Fighters would start with 2 Health, while Clerics and Magic-Users would start with 1 Health.

However, looking at only averages results in a very poor fit for low levels. While it works out to the same results on a high number of repetitions, at low levels repetitions are low and you’re cheating players out of a lot of chances to survive. For example, when taking a hit from a d6 weapon, a 1st level cleric (d6 HP) has a 42% chance of surviving. Even a Magic-User has a 25% chance of surviving, while the Fighter has 56%. Generally, you have slightly worse than even odds to survive a weapon with a damage die equal to your hit die at 1st level (because a tied roll still brings you to zero). See the chart below. 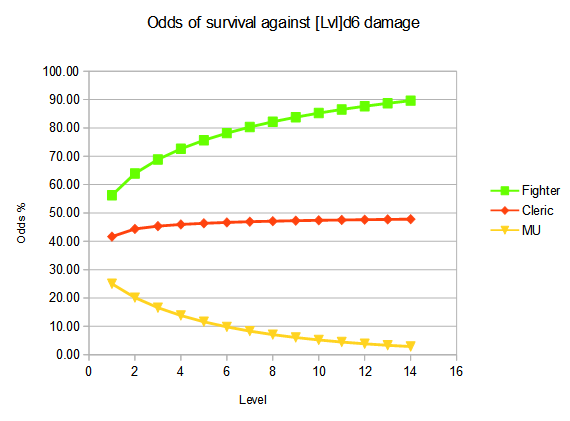 Apparently, the original reason for the creation of the granular hit point system in Arneson's games in lieu of the "one hit = one kill" system from Chainmail is that players didn't like it when their characters died too suddenly:


"It meant that players had a chance to live longer and do more. ... They didn't care if they could kill a monster in one blow, but they didn't want the monster to kill them in one blow."

(So, it might be that we're moving backwards with this experiment and there are very good reasons damage rolls are standard... but let's ignore all that for now.)

The simplest solution to the “level 1 problem” would be to have all classes start at their Health values of level 2. They would then not gain an additional Health at 2nd level, but follow the progression according to the above table thereon.

However, since we will have to make a whole new Health table anyway, this is a good opportunity to tweak the progression. We can use an entirely new equation, unshackled from the idea of one die size and one die per level. This way, we know where our numbers are coming from, and we’re not just blindly reimplementing artifacts that arose from the restrictions of the original system (i.e. the shapes of dice that were available to the original designers) while compounding them with new restrictions. And gaining 2nd level is the first time players get to experience leveling up, so it should feel like something! So, here’s an alternate progression you can use, based on a linear factor multiplied by level.

Health = 1+YxLvl, rounded up. Y factor: M-Us 0.55, Clerics 0.82, Fighters 1.12. These progressions follow the original progressions the closest at mid-levels. They start out better at low levels, and fall off at high levels. 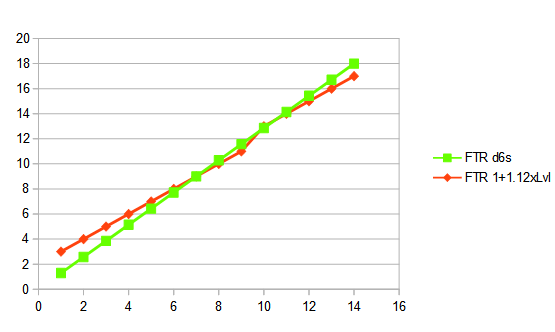 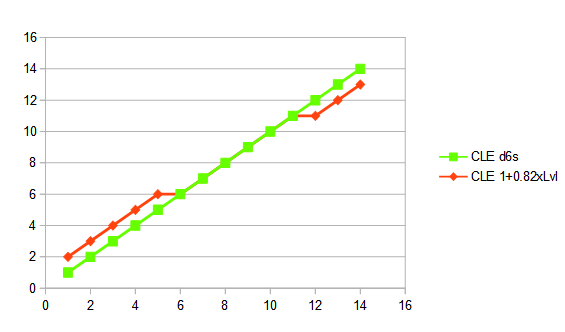 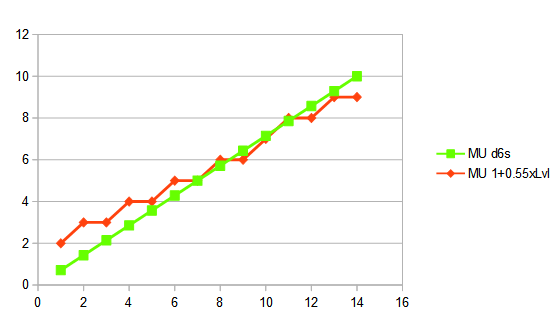 I think it looks quite good. A bit more survivability at low levels is not a terrible thing, in my opinion. Some interesting artifacts: Magic-Users do not gain any Health on levels 3, 5, 7 and 9, when they gain powerful new spell levels. Between levels 5 and 6, which is when Clerics suddenly gain two new spell levels in B/X (though not in Labyrinth Lord), they do not gain any Health. There is also a remarkable resemblance to the hit dice progression from the OD&D (before the Greyhawk supplement), where every class (and monstes) had a d6 hit die but gained them at different rates - Fighting-Men gained a die per level, Clerics gained one on almost every level, and Magic-Users gained one every other level.


The downside is that on each level up, players will have to reference both their class’s Health chart and the Constitution Health adjustment chart and sum the values. Then, because they progress at different rates, it is actually possible for them to lose Health on level up with a -1 or -2 modifier. That's obviously a huge flaw in these steps. So there needs to be some stipulation that your maximum Health can never decrease on level up. It gets rather messy and inelegant.

Constitution is the biggest obstacle I currently see to the new system. All this gives me half a mind to just get rid of the -3/+3 modifier range and have them go from -2/+2. Abilities shouldn’t matter overmuch, after all. Alternatively, one could have reduced Health gains from Constitution (and penalties which never overtake Health progression) and make Constitution important for other things, like dying/bleeding out.

Monsters will have one Health per HD. Thus a PC hitting a goblin or skeleton always kills it, no damage roll required. Functionally, this makes them similar to the famous Minions from 4th edition. Monsters with a plus on their HD will be treated as one HD higher for purposes of Health.

All sources of damage do one Wound for each damage die (d4 to d12). Each +4 counts as one additional die. For example, a trap that does 4+2d4 damage will deal three Wounds, and an attack that does 1d10+1 damage will deal one Wound. Spells which do half damage on a successful save will only do half Wounds. For example, a fireball spell has 8 damage dice so it will do 8 Wounds on a failed save, or 4 Wounds on a successful save.

The one exception is when halving the damage dice (e.g. due to resistances) would leave half a damage die, or when an attack would deal damage in an odd number of d3s. These are called “half-dice”. A half-die will have a 50% chance of doing no Wounds and a 50% of doing one Wound. For example, an attack that dealt 3d3 damage will now deal one Wound, and have a 50% chance of dealing a second Wound. Or, you hit a creature with a torch for 1d4 fire damage, which would usually be 1 Wound, but if the creature is resistant to fire, you only have 50% odds of dealing a Wound on a successful hit. On-hit effects are still applied regardless of damage. For example, a ghoul’s claw is d3+paralysis, so the paralysis is applied on every hit, even though damage is only applied 50% of the time.

(Also, to prevent everyone just using torches as weapons instead of swords, you may want to give them a reduced damage chance too, or say they’re only an effective weapon vs. specific enemies such as trolls and mummies).

What about two-handed weapons? Differentiating them will be dealt entirely with Fighter abilities. When using shields, Fighters can sunder them to negate damage. When using two-handed melee weapons, Fighters can attack again each time they score a kill. Greatweapons might also be allowed to overcome the slashing/piercing resistance of skeletons due to their large mass. Additionally, Fighters will deal an additional Wound on a natural 20.

All this leaves crossbows in a somewhat strange position - they shoot more slowly but deal the same damage as everything else. I may reinstate the armor piercing from LotFP there. Crossbows will fire every other round and pierce 2 AC for light crossbows or 4 AC heavy crossbows.

Unarmed fighting: If an attack roll with an unarmed strike succeeds, players need to roll to see if it deals a Wound. Since unarmed strikes had a d2 damage die before, their odds of dealing a Wound are now 2 in 6, plus 1 in 6 for each point of Strength modifier. Perceptive players will notice that this is the same chance as Open Doors rolls in B/X - perhaps we can rename Open Doors to “Smash” and use it for both. We could even use this chance for improvised weapons (e.g. torches) and treat them the same as unarmed strikes.

Posted by Homebrew Homunculus at 06:39

Very interesting. Posts which go back to the beginning of things and look at other evolutionary paths the game could have followed are among the best products of the OSR.